We had a couple of meters of snow in the Italian Alps last week… so much snow that the ski lifts opened late some mornings, while the mountain patrol bashed the pistes into shape.

Still, every cloud… These are the sketches I did over cappuccino and cornetto from the great café next to the ski lift, and the final studio painting.  They are a good example of developing an image over several iterations (hopefully without getting totally bored of it). 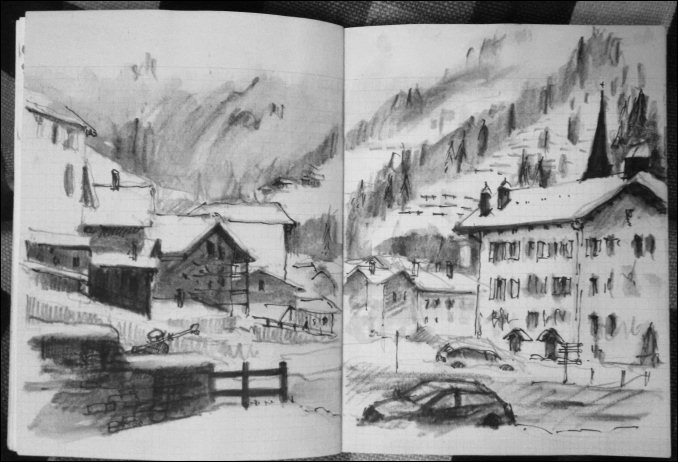 This was the view from my café table (graphite on paper with a little ink added at the end). It’s a great scene but I decided that I wanted more mountains in it, so the composition was more about the village cradled by the dramatic wooded slopes, than the village itself. The car in the foreground also dominates a bit. 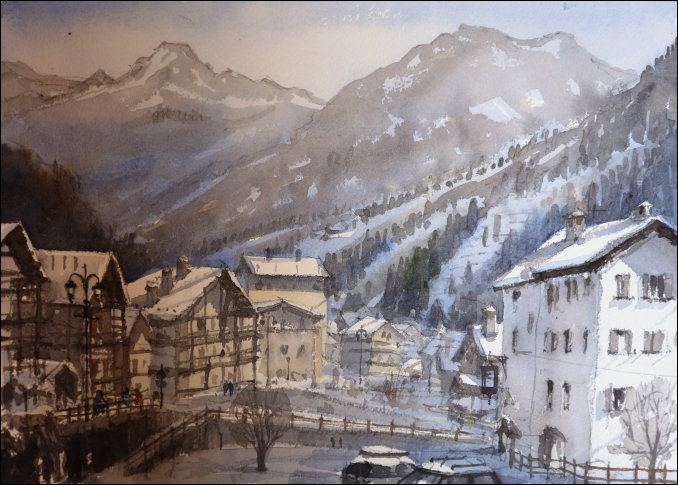 This was painted a couple of days later (standing outside the café in my ski gear, looking mildly deranged) while killing a couple of hours until the lifts opened. You can see I have pulled back the composition a bit – helped by the fact that the cloud was no longer hanging low in the valley and hiding the mountains.

This was the half-way point:

Notice that the painting was almost entirely monocrome until this stage. It also looked pretty flat. The problem is that there’s no difference in tone or  hue between foreground and background.  I find it far too easy to get absorbed in painting individual details and literally ignore the bigger picture. To fix it, I brought a wash of Cobalt Blue down from the sky to the tops of the houses, pushing back the tones (and the blue adding a bit of aerial perspective). Adding more Neutral Tint, I joined this with the shadows in the foreground. Lastly, I brought in some richer darks in the foreground buildings so they catch the eye more.  Take another look at the two images together – did it work?

Later, back at home, I produced the larger painting below. By now I was fairly happy with the tones and colours but wanted to broaden the view even more to show the grand sweep of the mountains.

Other than the wider format, it’s also obvious that I had much more time to build up textures and detail in this one (something to do with not standing out in the cold?)  I think the near building works better being closer, too, as it is now more clearly separated from the other buildings, and echoes the line of the mountain above it and leads the eye into the center of the picture.  Next year’s Christmas card, perhaps?

Eventually, the slopes opened and the sun came out.  So much for painting.

GALLERY PARIS  |  TECHNIQUES BLOG  |  ABOUT ME